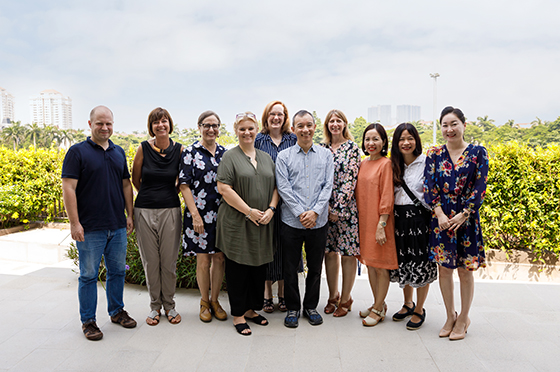 (Pictured: Board of Directors September 2019)

Board Chair, Amie Alley Pollack (Board appointed) joined the Board in June 2015 and became the Board Chair in June 2018. Previously, Amie was the Board Secretary 2015-2018, served as Chair Committee on Directors, Chair Head of School Search Task Force and Chair Transition Task Force. Amie is from the United States and holds a PhD in Clinical Developmental Psychology. Amie came to Vietnam as an academic psychologist from Vanderbilt University working in research and development in areas of mental health, children's health and education. Since 2018 Dr. Pollack has served as Director of Research and Development for VinaCapital Foundation. Amie has two children at UNIS Hanoi.

Board Vice-Chair, Ngo Thi Quynh Hoa (Board Appointed) joined the Board in June 2015 and became the Board Vice Chair in June 2018. Hoa has chaired the Advancement Committee (2016-2017) and is the member of the Committee on Directors since 2016. Hoa is a Vietnamese national with over 20 years’ experience of leading, managing and evaluating international development programmes and policy dialogues. She has held key positions with a range of organisations, including the World Bank, UN (UNDP and UNIDO), and the UK Department for International Development (DFID). Her work has contributed directly to the development of Vietnam, Myanmar, Cambodia, Laos and Timor-Leste. Previously a Fulbright Scholar, Hoa holds a Master’s degree in Development Economics from Williams College (USA), and two Bachelor's degrees, one in Education and Languages teaching from the Hanoi Foreign Languages’ Teacher Training College, and another in Banking and Finance from the National Economics University (Vietnam). Currently Hoa is working with UNICEF. Hoa has one child at UNIS Hanoi.

Board Secretary, Louis Vigneault Dubois (UN appointed) joined the Board in July 2017 and became the Board Secretary in June 2018. Louis was a member of the Campus Development Task Force 2017-2018. He is the Chief of Communication and Advocacy UNICEF Viet Nam. He oversees UNICEF's communication and advocacy agenda for children while working to enhance UNICEF's profile and image in the country and abroad. He also works within the broader UN Communications and Advocacy team in Viet Nam on specific communication priorities. Before taking on this assignment in 2015, he held similar functions working for UNICEF in Côte d’Ivoire (2010-2015) and in Liberia (2009-2010). Prior to joining UNICEF Haiti in 2008, Louis has lived in DR Congo, France and his home country, Canada. Louis has one child at UNIS Hanoi. He speaks fluent French, English and German.

Treasurer, Nguyen Van Hieu (Board appointed) joined the Board in 2011 and was the Board Chair from January 2015 to June 2018. Previously, Hieu served as the Board Secretary in 2012-2013, as chair of the Finance Committee in 2013-2014, as chair of the Buildings and Facilities Task Force in 2012-2013, and as members of both the Governance & Policy Committee and the Finance Committee in 2011-2012. Hieu worked for Oracle Vietnam in 1995 and later became its Managing Director until 2002. He then held a number of regional management positions in the Asia Pacific Region for Oracle based in Singapore until 2007, at which time he decided to return to Vietnam as an independent entrepreneur. Hieu has served on a number of small business board including a board of governor member for the American Chamber of Commerce in Hanoi. He is currently involved in health care and IT services. Hieu is Australian with a Bachelor of Electrical Engineering degree from the University of New South Wales, Australia. He has two children at UNIS Hanoi.

Michelle Dinh Jones (Parent elected) joined the Board in June 2018. Michelle arrived in Hanoi in 1999 to work as a nurse trainer through a project at Viet Duc & Bach Mai hospitals. At the end of the project, she decided to re-train as a teacher and worked for the British Council, training primary school teachers. Michelle moved into Educational management in 2004 and became Country Manager for a large language centre with five training venues and over 100 expatriate teachers nationwide. In 2010, she started working as a manager for an international kindergarten in Tay Ho District. Now, in addition to owning and running the school, Michelle regularly delivers training on play-based learning and child led curriculum through the Department of Education. She also consults for a number of large independent Vietnamese schools wanting to incorporate play based learning into the traditional curriculum. Michelle is British and has one child at UNIS Hanoi.

Caryn R. McClelland (Board appointed) joined the Board in September 2018. Caryn is the Deputy Chief of Mission (DCM) with the US Embassy in Hanoi and began her assignment in Vietnam in September of 2017. Prior to this assignment, Caryn served as the Acting Principal Deputy Assistant Secretary in the Bureau of Oceans and International Environmental and Scientiï¬c Affairs in Washington, DC, and has also held senior diplomatic postings in Latvia, Indonesia, Azerbaijan and Malaysia. She has also served as a Senior Advisor to the Special Advisor to the President and Secretary of State for Caspian Basin Energy Diplomacy and as the Eurasia Regional Energy Ofï¬cer in Washington. Caryn received master’s degrees from the National War College at the National Defense University and San Francisco State University and a bachelor’s degree from UCLA. She has one child at UNIS Hanoi.

Maria S. Chung (Parent Elected) Maria joined the Board in June 2019. Maria is a lawyer who moved in 2009 from the City Prosecutor’s Office in California to work for Baker McKenzie in Hanoi in the areas of international arbitration and corporate compliance. Maria is Korean American and served on the Korean American Democratic Committee and the Korean American Community Lawyers Association while working in California. In Hanoi Maria is actively involved in community and business organisations including American Chamber of Commerce, Korean Chamber of Business and Board of Korean Residents Association (specifically the Education Committee).  In 2018 Maria became the Strategic Projects Chief Coordinator with Kennametal Prior to joining the Board, Maria was a member of the UNIS Hanoi Fundraising Task Force. Maria has one child at UNIS Hanoi.

Le Thanh Forsberg (UN appointed) is joining the Board in August 2019. She is currently working at the UN Resident Coordinator’s Office as UN Results and Partnerships Specialist. Prior to the UN in Vietnam, she served as a research advisor and anti-corruption policy specialist at the Swedish International Development Cooperation Agency (SIDA) in Stockholm, Sweden. Before joining SIDA, Ms. Forsberg was an Oxford-Princeton Global Leadership Postdoctoral Fellow where she focused on health policy research. She holds a Ph.D. from Lund University and the Stockholm School of Economics in Sweden. Le Thanh has three children at UNIS Hanoi.

Cristiana Sparacino (UN Appointed) Cristiana was appointed to the Board in August 2019. Cristiana is an economist with the International Fund for Agricultural Development (IFAD). Her work involves the design and delivery of agricultural and rural investment programmes mainly based in West and Central Africa, but also in Eastern Europe, North Africa and the Middle East.  Projects have included natural resources management, agricultural production, food value chains development, community-driven development, and gender equality. In addition to this work, Cristiana has been coordinating and lecturing in the Rural Development Module of the Master’s in Human Development and Food Security in the Faculty of Economics at the Universita’ di Roma III. Cristiana has a PhD in Institutions, Agriculture and Policies for Economic Development from the Faculty of Economics, University of Rome, La Sapienza, and an MSc in Development Studies from the London School of Economics, as well as a Master’s degree in Economics from La Sapienza.

Ex-Officio member of the board

Jane McGee Head of School August 2018. Jane is Canadian and holds a B.Sc. in Mathematics, a B.Ed.  Intermediate/Senior Math and Science, and an M.Ed in Administration and Policy all from Queens University, Ontario, Canada. Prior to joining UNIS Hanoi, Jane was Head of School at Vientiane International School, Laos and was Assistant Superintendent at the American School of Bombay (ASB). Jane also held the position of High School Principal in ASB and High School Principal at the American School of Warsaw. Prior to that Jane has held positions as IB Coordinator, High School Counsellor, Mathematics Department Head as well as Math and Science Teacher. Jane has over 25 years’ experience in senior administration and teaching in Italy, Egypt, Thailand, Poland, India and Laos.