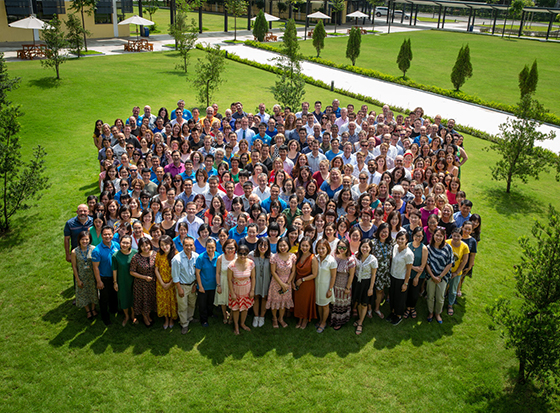 Please also see our Faculty and Staff Directory for a full listing of all UNIS Hanoi employees.

We are delighted to introduce you to our Leadership Teams for Elementary, Middle, High School and Administration.

Jane started her international education career right after she graduated from university in 1991 and has since been working at international schools in Rome, Cairo, Bangkok, Warsaw, Mumbai, and Vientiane. Prior to joining UNIS Hanoi in August 2018, she was the School Director at Vientiane International School. She has been a teacher of Science and Math, an Head of Department, an IB Coordinator, a Counsellor, a Principal, an Assistant Superintendent, and a Director. Jane has a BA of Science in Math, another BA of Education in Math and Science, and a Master's of Education in Administration and Policy. Jane is from Canada.

Megan joined UNIS Hanoi in August 2015 to lead a new Elementary Administration team. She came from the GEMS World Academy Dubai UAE, where she spent seven years in a range of impressively growing educational leadership roles. She holds a BA in Education, Postgraduate certificate in International Education, and a Master's in Education. Megan is also an IBO-PYP Workshop Leader and has delivered workshops for the IBO in Africa, Europe and the Middle East. Megan has more than 20 years of experience in teaching, school administration, staff professional development and curriculum management from IB World Schools in Colombia, India and UAE. Megan is from Australia.

Nitasha joined UNIS Hanoi in August 2015. She has a BA in English literature, a Postgraduate Certificate in Education, and a Master's in curriculum and teaching. Previously, Nitasha was Associate Principal at the American School of Bombay in India, leading the development of their Early Childhood Programme. Prior to ASB, Nitasha was a teacher and a curriculum coordinator at Highgate School, London. Nitasha is from India.

Before joining UNIS Hanoi in August 2015, Stephen was Principal of the International School Nido de Aguilas, Santiago, Chile. He holds a BA in Liberal Studies and a Master's in Educational Leadership. He has been an educator for more than 20 years with 14 years of administrative experience in both USA and international schools. Stephen is American.

Before joining UNIS Hanoi  in August 2016, Josh had been an educator for 9 years, first at schools in his home country Australia, then internationally in Saudi Arabia, and Indonesia. Josh possesses a BA in Primary education, a Master’s in Educational Leadership, and a Certificate of International Educational Leadership from the PTC. His diverse experience includes several years working in various roles: Teaching, Curriculum Development, Team Leader, Activities Coordinator, and Assistant Principal. He has been involved with the PYP for over 5 years. Josh is both Australian and British.

Kris joins UNIS Hanoi from the International School of Nanjing where she was the K - 8 Counsellor. She holds a BA in Liberal Studies, a Master's of Science in interdisciplinary studies, and another Master's in School Counselling. Before moving her educational career to counselling in 2012, Kris was an elementary school teacher. She has 17 years experience working internationally, in Abu Dhabi, Bangladesh, and Nanjing. Kris is from the US.

Dylan joined the Elementary School team in 2016 and started the role as Counsellor in 2017. He has 13 years experience in teaching and learning, both in Australia and then internationally at the Western Academy of Beijing where he was also the ES Counsellor. Dylan has two BAs in Psychology and Education, a Diploma in Counselling, and a Master's in Leadership and Administration. Dylan is Australian.

Before joining UNIS Hanoi in August 2017, Scott was the High School Principal at the Dubai American Academy in the UAE for five years. He started his career as a lawyer in New York, where he also taught for six years after joining the education profession. His 14 years of classroom experience before becoming an administrator, also includes teaching Social Science and IB History at the American School of Warsaw. Scott holds both Irish and American citizenship.

Prior to joining UNIS Hanoi in August 2016, Glenda had 22 years experience, 11 of which were at the American School in Japan. While at ASIJ she advanced through various positions including HS Visual Arts Teacher, Teacher Leader, Department Chair, HS Instructional Technology Coach and the Director of Strategic Innovation. She has a BA in Visual Arts Education, an MA in Educational technology & assessment and is now working towards a second MA in Educational Leadership and Management. Glenda is from Australia.

Marc Joined UNIS Hanoi in 2012. Prior to UNIS he worked in China assisting schools with IB development and authorization. His 20 year career in education also includes time in the United States, where he served as a classroom teacher, Director of Athletics, Deputy Principal, and Principal in secondary schools. Marc holds a BS in Science and Asian Studies, an MA in Marine Science, an MA in Education, and a Postgraduate certificate in Educational Leadership. Marc is American.

JJ holds a BSc in Agriculture, a Masters’ in Educational Administration and a Principalship Certificate. He brings to us more than 10 years’ experience teaching at middle/ high school levels, 2 years coaching teachers in the digital learning spectrum and 2 years supervising a school district of over 200 teachers. Before joining UNIS Hanoi in 2017 as Design/Art Teacher, JJ was working at the Seoul Foreign School. He is from the US.

Daniel has a BA in Geography and History, and a Diploma in teaching and learning. He arrived at UNIS Hanoi in August 2016 as a returning teacher, having taught here several years ago. He left for Denmark where he taught MYP Humanities at Copenhagen International School for 9 years. Besides his 12 year experience as an MYP teacher, Daniel has also been a Grade Level Leader, Head of Department, and Community & Service Coordinator. Daniel is from New Zealand.

Elliott joined UNIS Hanoi in August 2015. He has a BSc in Biological Sciences, and studied pedagogy at the Institute of Education in London. His responsibilities at UNIS Hanoi have included teaching DP Biology, teaching DP Environmental Systems and Societies, and working as the Grade 12 Level Leader. Previously, Elliott was the Head of Department for science at ISHCMC in Ho Chi Minh City. Elliott is from the UK.

Lee holds a BA in Psychology, and an MA in Educational Psychology. She joined UNIS Hanoi in August 2017 with 23 years of experience, 18 of which are from the international schools, Rabat American School Morocco and American International School of Johannesburg. She has held various counselling and guidance positions, including ES Counselor, MS Counselor and D-12 School Psychologist. Lee is American.

Brenda joined UNIS Hanoi in August 2016. Prior to UNIS Hanoi, she was the High School Counsellor and Department Coordinator at NIST in Bangkok. She was a school counsellor in New York for 11 years before working with international schools. She has a BA in Psychology and an MA School Counselling. Brenda is from America.

In addition to the Head of School, the Principals and their Deputy Principals, the following administrators make up the Leadership Team at UNIS Hanoi.

Misty joined UNIS Hanoi in August 2017 from her position as Assistant Head of School for Finance and Operations at the Seoul Foreign School. Her BA is in Organisational Development and she has an MA in Business Administration. She is a Certified School Business Specialist - Accounting, a Certified Fraud Examiner, and is Certified in Risk Management Assurance. Prior to Seoul, she worked in various public and private schools and organisations as Chief Financial Officer, Chief Internal Auditor, Director of Administration and teacher at Austin Business College in Texas. Misty is American.

Tarique has a BSc specialising in physical education, an MA in Educational Leadership and many years’ experience as a teacher and Director of Activities. Before joining UNIS Hanoi in 2014, he spent 19 years working at international schools in the Middle East including the American School of Kuwait, The American School of Dubai, and The KAUST School. Tarique grew up in both Kuwait and the US and is a citizen of both countries.

Emma joined UNIS Hanoi in 2011 from the American School of Paris where she worked for nine years growing their Advancement Programme (Marketing, Communications, Constituent Relations and Fundraising). Prior to ASP, she was Head of Fundraising at the Outward Bound Trust in the UK, her first role in the not-for-profit sector. She worked for 10 years in the British media in both print and television. Emma is from the UK.

T.K. joined UNIS Hanoi in 2019. She began her career in the corporate industries advancing the mission and helping these organisations understand customer service including telling a story about their vision. Since leaving the corporate sector, she has spent 15 years in Admission/Advancement with schools in the United States, China, and Guatemala. She has also provided her expertise as a consultant with international schools throughout the world. T.K. has a Bachelor’s degree in Recreation and is from the United States.

Chi joined UNIS Hanoi in August 2018 with over 15 years of working experience in Human Resources in the fields of Development Programme with UNDP Vietnam and Industrial Engineering at ThyssenKrupp, a German Multinational Corporation. She has a BA specialising in Economics from Hanoi Foreign Trade University and an MBA in Project Management from CNAM in Paris, France. Chi is Vietnamese.

Before joining UNIS Hanoi in 2015, Adam had served as a Senior IT Architect for Stemcell Technologies for 11 years. He has 16 years experience in IT,  in with eight of them in leadership roles. Adam has BA in Entrepreneurship and professional certificates in Windows Systems and Google Apps.  Before joining Stemcell Adam founded ArcherVentures - a technology service provider with applications for military, property management, public relations and legal services. Adam is Canadian.