<Back to News
Varsity Girls Volleyball 2019

We hustle into our huddle, arms around one another. As each second passes, the clock nears zero and we exchange looks of unease, but words of strength and confidence. The timer goes off, our hands reach to the center of our bunch. Frances and Co May, our team captains wink at each other and chant, “Phoenix on three”, and in unison, we shout, “One, two, three Phoenix”. This marks the beginning of each of our games this season.

The volleyball team this year started off shaky. Comparing our first game against a university team, to the games we were able to play out during the APAC tournament, you see evident progress. As the season went by, our team chemistry augmented, our sense of unity was built with every practice, every game, every team dinner, every win, every let down. We started off as individuals each playing our own game, and ended the season knowing to play our game as a team.

This noticeable change from the start to finish wouldn’t have been possible without the guidance and support of Coach Schneider and Coach Thompson. Each game, they noted what we needed to improve on, recording data on the accuracy of our serves, serve receive, our sets. They made time for each of us to mark our progress and set goals for ourselves and the team. They designed workouts and made practice an environment where we were comfortable to make mistakes. Their effort throughout the season, contributed immensely to the development of our skills.

We also had our team captains who made significant effort throughout the entirety of the season. Co May and Frances motivated our team, made practice plans, and spoke like true leaders. Both captains worked tirelessly to support our team both on and off the court.

Throughout the season, we waited anxiously for APAC. Before we knew it, the four day tournament we had been training for all season, abruptly appeared at our feet. We were ready. Pool play brought a variety of challenges, and the team figured out how to play together at a new level.  We finished 2-3 in pool play, notably taking the only set from Shanghai American School. In the playoffs, our team took a respectable 5th place, beating Hong Kong International School, a serious rival from the previous year. 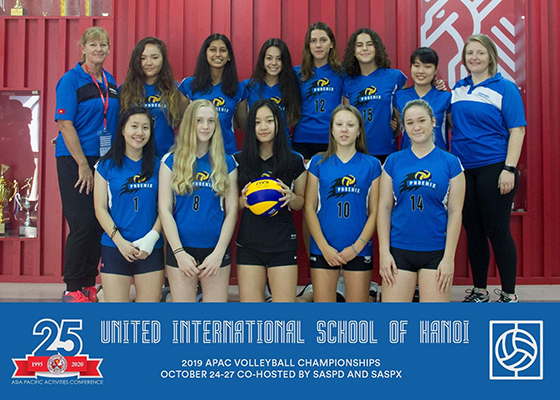