<Back to News
Recognition for Two Departing Board Members 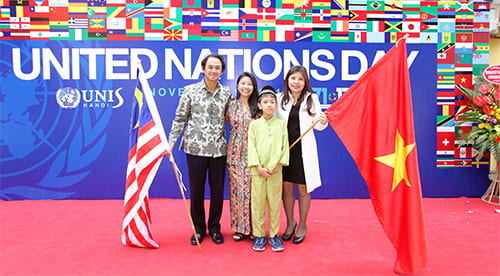 Barry has more than 30 years of experience in the IT industry, starting from being a software developer to project management, moving on to sales, business development and corporate IT management in Vietnam. His daughter graduated from UNIS in 2017 and his 2 younger children are current students at UNIS Hanoi.

We are grateful for Barry’s dedication and long-standing service to UNIS Hanoi!

The Board would like to thank Catherine Phuong for her dedicated work on the Board 2017-2019. Catherine has served as a UN-appointed member. She joined the Board as soon as she arrived in Hanoi in September 2017, leaving unpacked boxes to attend the 2-Day Board meeting. She has been an active contributor at Board meetings and attended the East Asia Region Council of Schools Leadership Conference with the Board. Catherine was member of the Fundraising Task Force during 2018-2019 where she particularly contributed to reviewing the ethical framework for major donations and defining the Impact Fund for next year. Catherine Phuong is French and works for the United Nations Development Programme as Assistant Country Director – Governance and Participation.

Thank you to Catherine for all her valuable contributions!