<Back to News
The Historic APAC Girls Soccer Team

The best performances on the field never actually start when a team steps on to the field. They start long before that moment. They start the instant that a team decides who it wants to become. For this year's historic Varsity Girls Soccer team, that moment came two years ago. The team was having a team meeting. They sat in a room strung with posters. Each poster had statements written on them such as, "We can compete for a championship" and "Other APAC teams take us seriously." On each paper the players placed different colored sticky notes depending on how much they agreed with the statement. Red was for "disagree," yellow was for "kind of disagree" and green was for "definitely agree." The posters were full of yellow and red stickers. Â Just two years earlier the team had finished playing in an APAC tournament where they not only didn't win a game but they didn't score a single goal. Other teams didn't take UNIS Hanoi seriously. Why would they? UNIS Hanoi themselves didn't think they could compete at APAC. 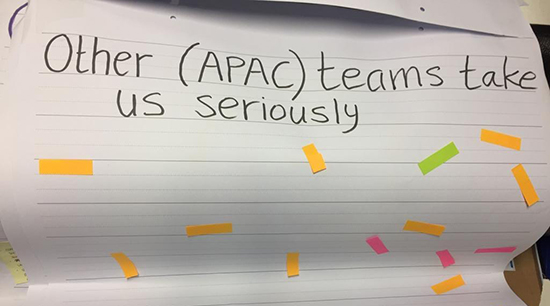 But at that moment, in that meeting the girls looked around the room and decided they wanted to change all that. Â They no longer wanted to play in scoreless APAC tournaments where no one feared them. They wanted to compete. So they began the long hard process of reaching their goals. The girls committed to training all off season, improving their skills, mentoring younger players, watching game film, eating healthy and staying fit. During the season they continued their hard work and dedication giving up Saturdays for runs in Soc Son, evenings to study game tape, afternoons and spring break for extra practices. By April 11, when the girls arrived in Hong Kong for the APAC tournament, they were ready. 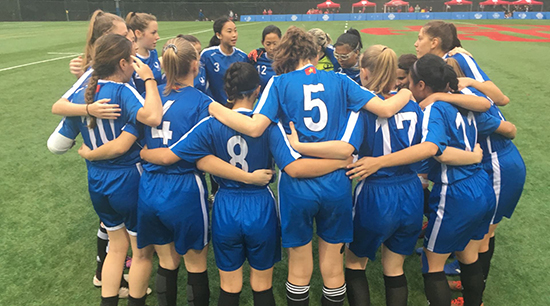 The first game was against Seoul Foreign School. UNIS Hanoi got off to a good start by playing to their strengths. They played possession style football looking for triangles and passing opportunities from the defense through the midfield. Then maintaining possession by putting relentless high pressure on the opposing defense to create scoring opportunities. UNIS Hanoi scored their first and second goals on such pressure. The first was off a cross from Natalie that Josefine raced to and struck into the goal. The second was after the strikers pressured a defender into desperately trying to clear the ball only to find Uyen racing in to head the ball into the back of the net.

The second game of the day against Hong Kong International School proved a difficult one for UNIS Hanoi. Â Just before halftime, starting center back Phoebe broke her arm and Phuong the other starting center back injured her ankle. Without the heart of it's defense UNIS Hanoi quickly found themselves down 3-0. But through pure team play and determination, they came back to score two goals one by Natalie and the other by a combined play from Irma and Ines. The game ended 3-2.

The next day UNIS Hanoi needed a win against Canadian Academy and Shanghai American School if they wanted to keep their chances of going to the championship alive. It wouldn't be easy without their two starting center backs. Co May and Sian stepped up and took over as center backs for the day and they played magnificently. Through brilliant team defense, UNIS Hanoi held both teams scoreless and got two 1-0 wins off of scores from So Eun and Uyen.

On the final day of competition UNIS Hanoi found themselves in a position to make the final if they could get either a tie or a win in their game against Western Academy of Beijing (WAB). Phuong was now healthy enough to play. UNIS Hanoi was warned by other teams that they might get muscled off the ball. Â But UNIS Hanoi would have none of that. They matched the physical toughness and speed of WAB by playing tough and fast on their own. The game got off to a scary start when WAB scored an early goal and went up 1-0. But UNIS Hanoi didn't stop believing in themselves and just before the half, Irma found the ball on the edge of the box and shot it past the goalkeeper to tie the game at 1-1. UNIS Hanoi held strong for the next 35 minutes and pulled out the tie that they needed to guarantee their spot in the championship game. Â As the final whistle blew the players swarmed the field hugging each other in recognition of what they had just accomplished. They had just become the first ever women's team of any sport at UNIS Hanoi to make an APAC championship game. 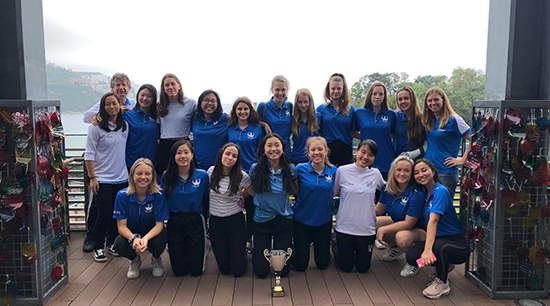 The final pitted UNIS vs. the host school HKIS, who most teams had said was unbeatable. Â But if there was one team at the tournament not afraid of HKIS, it was UNIS Hanoi. That was because UNIS Hanoi knew just how good their own team was. Â The game was a hard fought, physical battle with neither team giving any balls away easily. HKIS scored off an impressive shot before halftime to go up 1-0. UNIS Hanoi played strong and physical and had their chances but ultimately was not able to score an equalizer. They lost 1-0.

In the end the UNIS Hanoi girls did not win the championship but they accomplished the goals that they set out for themselves that day two years ago. They became the team that everyone took seriously and the team proved to themselves just how much they are capable of.

Amazing job girls. You are legends. 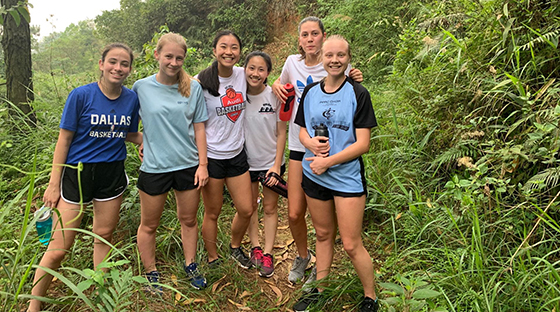 A special congratulations to the seniors: Phoebe, InesÂ Vi, Irma, Phuong, Uyen and Thanh. Â What a legacy you have created.